On the highway at 5am.  So cold.  Push into Bozeman.  Farewell again.  Back to Livingston and de-thaw.  Pack up and head back down to Spuds and have conversation.  I decide to go south to Gardiner for a few days.  Pretty drive down.  Camp at National Forest campground two miles from town, convenient.  Awesome evening run from camp dropping down a big canyon to Bear Creek and its confluence with the Yellowstone inside the park.  Beautiful.  Back to camp and off to the hot springs at The Boiling River  just north of Mammoth.  The Boiling River comes out of the ground some 100 ft or so up from its confluence with the Gardiner River.


Really cool spot.  I’m actually surprised the national park hasn’t shut it off to travelers yet.  I guess give it a few more years.  Indian food back at camp.

Caught up on sleep.  Day spent in town.   Evening ride up to Jardine and Crevace and back down crosscountry via the ridge.


Share camp with a fellow rider from Vancouver.  Entertaining evening ‘debate’  with the camp host over a $3 extra vehicle fee.  Its interesting that a full size diesel truck can pull in with two ATVs in the back, pulling a 25’ trailer with a dirt bike on its hitch, 8 kids can pour and they pay for 1, but two guys on motorcycles in tents have to pay extra.  Pretty fun to watch them hash this out.  Rain all night.  Snow predicted??  I cant wait to see a cactus.

I awake to find my fellow camper departed.  The campground is lively social activity.  I meet Jim of Backcountry Vehicles.  On there own trip in custom built expedition rigs.  Extremely talented and interesting guy, I’m pretty envious of his abilities.  Go to town for a burger.  Heavy rain turns to hail and I wait out the storm and watch basketball.  I return to the Boiling River and await Nicks arrival in Gardiner.


Beer and pizza at the K-Bar, a place a good friends mother used to frequent in the seventies.  Another hot springs dip, and back into town and beer and chat with pretty Bulgarians..  Camp at the cabin on the lake.

Arrive in Big Sky, Mt via West Yellowstone. Pretty but cold day on Frank.  I arrive early and set up camp hidden in the trees and return to the resort.  I head out for a couple hour run exploring parts of the course for this weekends race.


I probably over did it.

I explore the area a bit more and meet Dan, a ski bum/employee of the resort who ends up offering me a place to stay for the weekend.  I am only to obliged to accept.  I head back to camp in HEAVY snow.  Slow, cold and wet, I pack up camp and inch Frank down the mountain to Dan’s place through a white out.  Feels good to be out of the elements.

Late start.  Head back up to the resort for another run.


I do the Vertical Kilometer route, up Bonecrusher Ridge to the summit of Lone Peak.


Awesome terrain.  Down and back to Dan’s.  Freezing.

Up to the resort and watch the start of the VK race.  I meet up with Jamil and Catlow, other Az runners at The Rut.  Catlow and I do an easy hour on the end of the course while Jamil races.  We socialize with the scene for t most of the day and I impose myself on the Run Steep Get High’s hotel room.  Hot tub, legs feeling awful, hoping they shape up by morning.

Run the Rut 50k
Not much sleep the last few nights.  I roll my legs out, hoping that they will wake up a few miles in.  Big Nutella breakfast.  Quick start.  3rd time up this climb this week, it takes me way longer than either other time, legs dead, no energy, already shot.  I fumble into the 1st aid station and debate the day.  Two weeks from the Mogollon Monster, I should have never started, but I had been looking forward to the course, this race all year.  I head out and make it about a minute.  Legs wont propel.  I head back and tell the aid volunteers I’m out and sit.  5 minutes later I tell them I’m back in and take off, my left quad seizes and cramps and falls off.  I hitch a ride back to the start and drop.  30 minutes in the hot tub before my inner thigh stops pulsing.  So bummed I didn’t get to experience The Rut.  Rest of the day spent cheering on friends at the finish.  Evening after party with the mechanical bull.  I lie low for awhile until the whiskey gingers and a certain pork products mescal picks me up.  Bacon, Beard, and Snacks have quite the night.

Leave Big Sky and head in the general direction of home.  I skirt west of Yellowstone and take a series of scenic byways southward.  I take a wrong road east and end up at Cave Falls in the southwest corner of Yellowstone.


Frank throws his chain.  Onwards about 5 miles and I break Frank’s clutch cable.  Ended up feeding through bailing wire and tying off.


It gets me moving again and I camp near a creek.  Asleep by 7.

29 years old today.  One could dare say I’m almost 30.  I head back out the way I came and find the right road that cuts east through the narrow gap of land between the Yellowstone/Teton parks.  Flagg Ranch Rd is spectacular.


My new clutch cable breaks and I reefed another.  Continue.  Good couple of days of calm, slow and scenic riding on Frank.  I arrive back at the Tetons and camp again at Shadow Mountain.  Climbing tomorrow.

I meet Nick the trail head and we hike into Guides Wall via Cascade Canyon.  Its been some 7 years since I’ve been on this trail.  Easy approach for the Tetons (2 hours or so), strenuous anywhere else.  The climb is perfect.


So fun.  We rap down in a brief shower before the sun shows up.  Back to camp.  There are wolves howling outside my tent right now.  Feels like wilderness.  It feels great.

Leave the Tetons and continue south.  Stop at the parts store to find a new clutch cable.  Apparently there are no Kawasaki dealers around these parts.  I buy a random cable and make it fit.  Fiasco sucks up most of my day.  The cable was about 4 inches too long for the housing.  Eventually got it to work by:

South through Snake River canyon.  I have never been out east during the Fall to see the leaves change, but I cant believe the colors in this canyon.  The hottest reds, pinks, yellows and greens, all tucked in this awesome river gorge.  The east has nothing on this place.  Unreal.  I get to somewhere in southern Wyoming.

Drive through Kemmerer, Wy home of the first JC Penney store.  Not very impressive.  The square area kind of reminds me of a Wyoming version of Ajo, Az.  Stop at Fossil Butte National Park and get my geology on.  Wild dirt road through the country and up at Flaming Gorge Reservoir.


I have never explored these upper parts of the Green River. 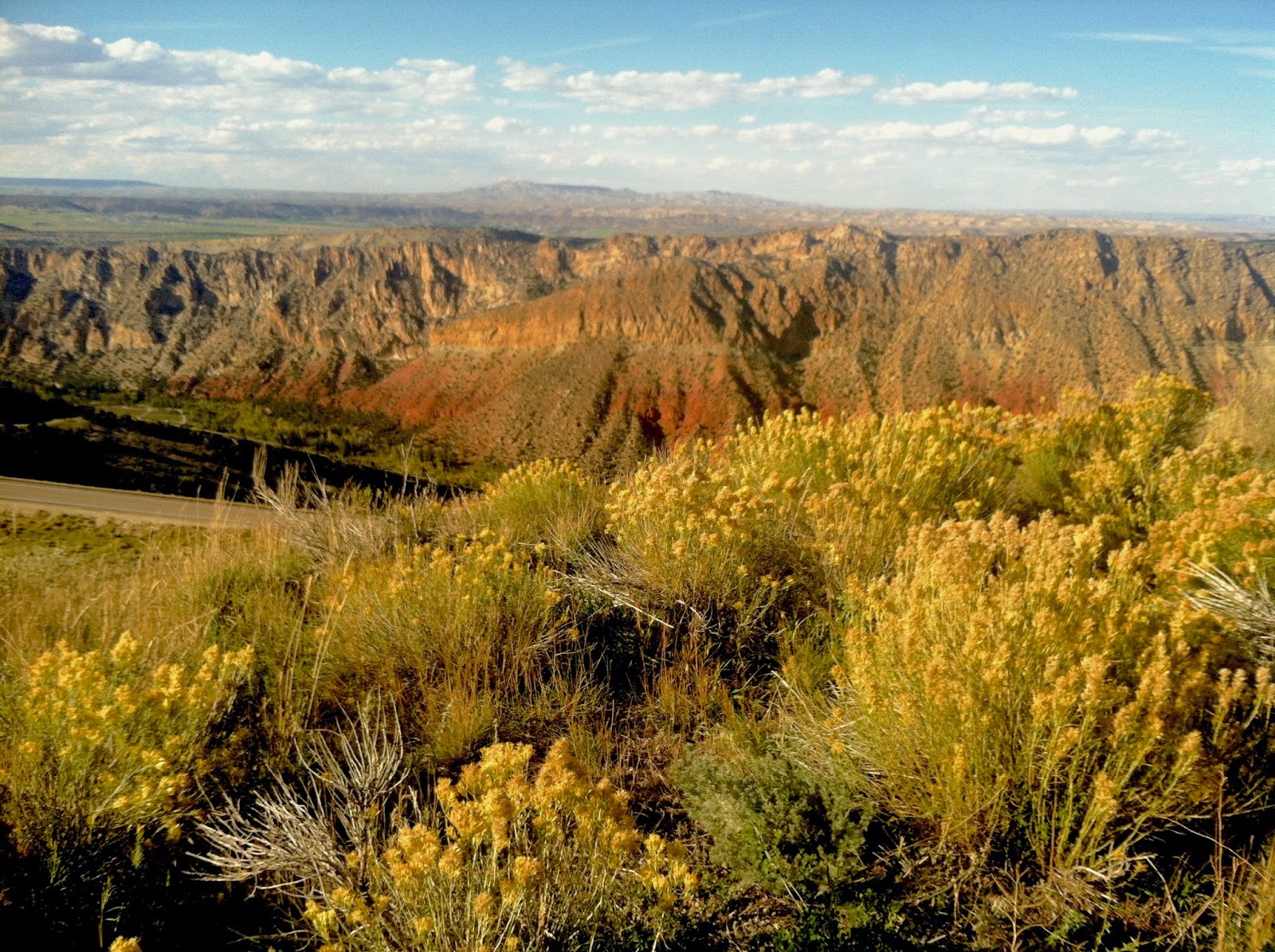 
I run along the rim for 90 minutes or so, enjoying once again canyon country.

Another spectacular morning cruising  through Aspen growths and crossing south over the Uintas, the only major east-west running mountain range in the country.


Get lost all day navigating more dirt roads.  This is oil country , where apparently through roads are a thing of the past.


Eventually arrive at 9 Mile Canyon, once a survey of John Wesley Powell and his team, now a more or less tourist byway for sights of the ‘largest art gallery’ in the world.


Pretty amazing petroglyphs all along the canyon, determined to outlast any of us. 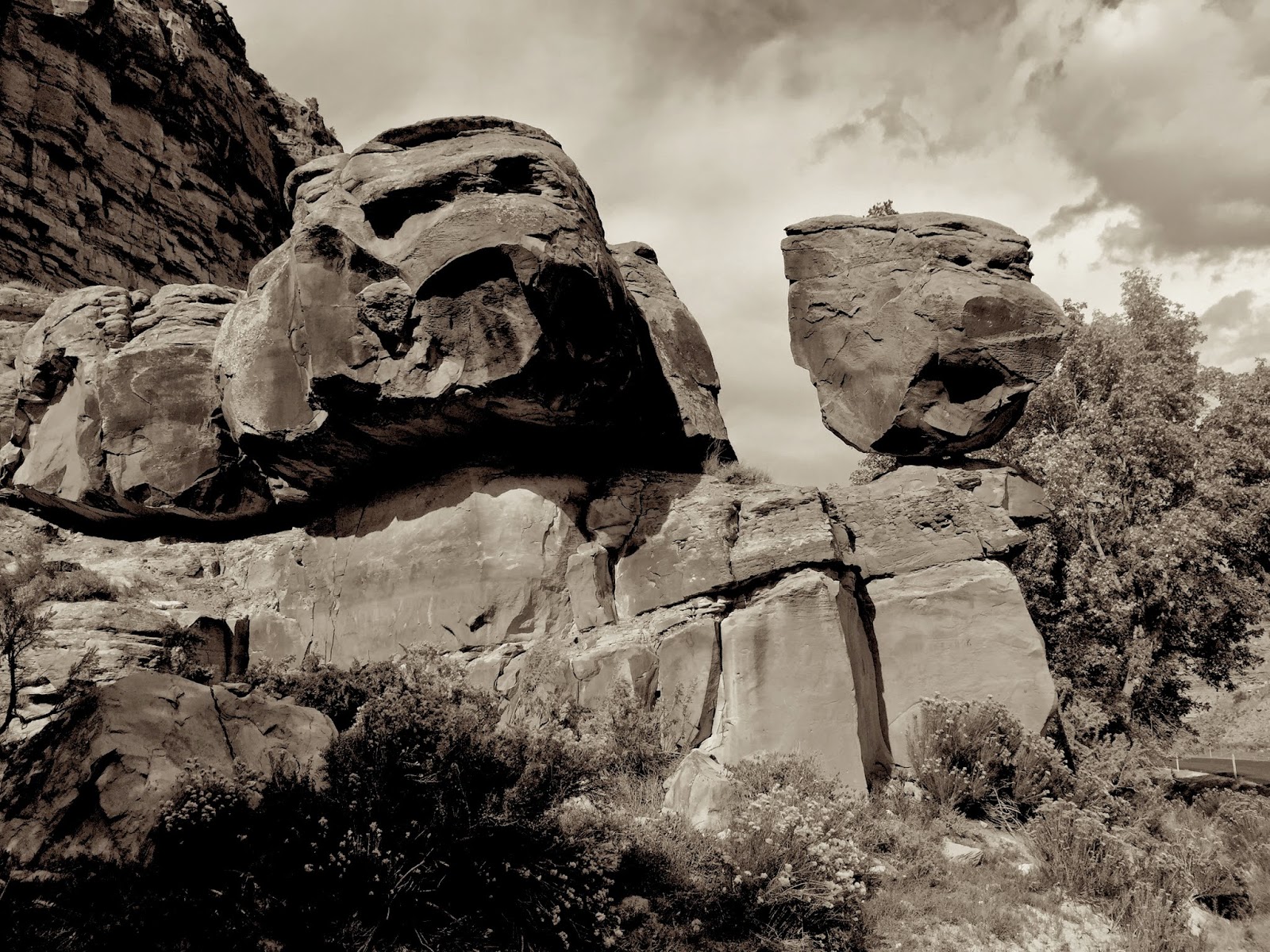 I push for Green River, Ut, expecting something that wasn’t there. 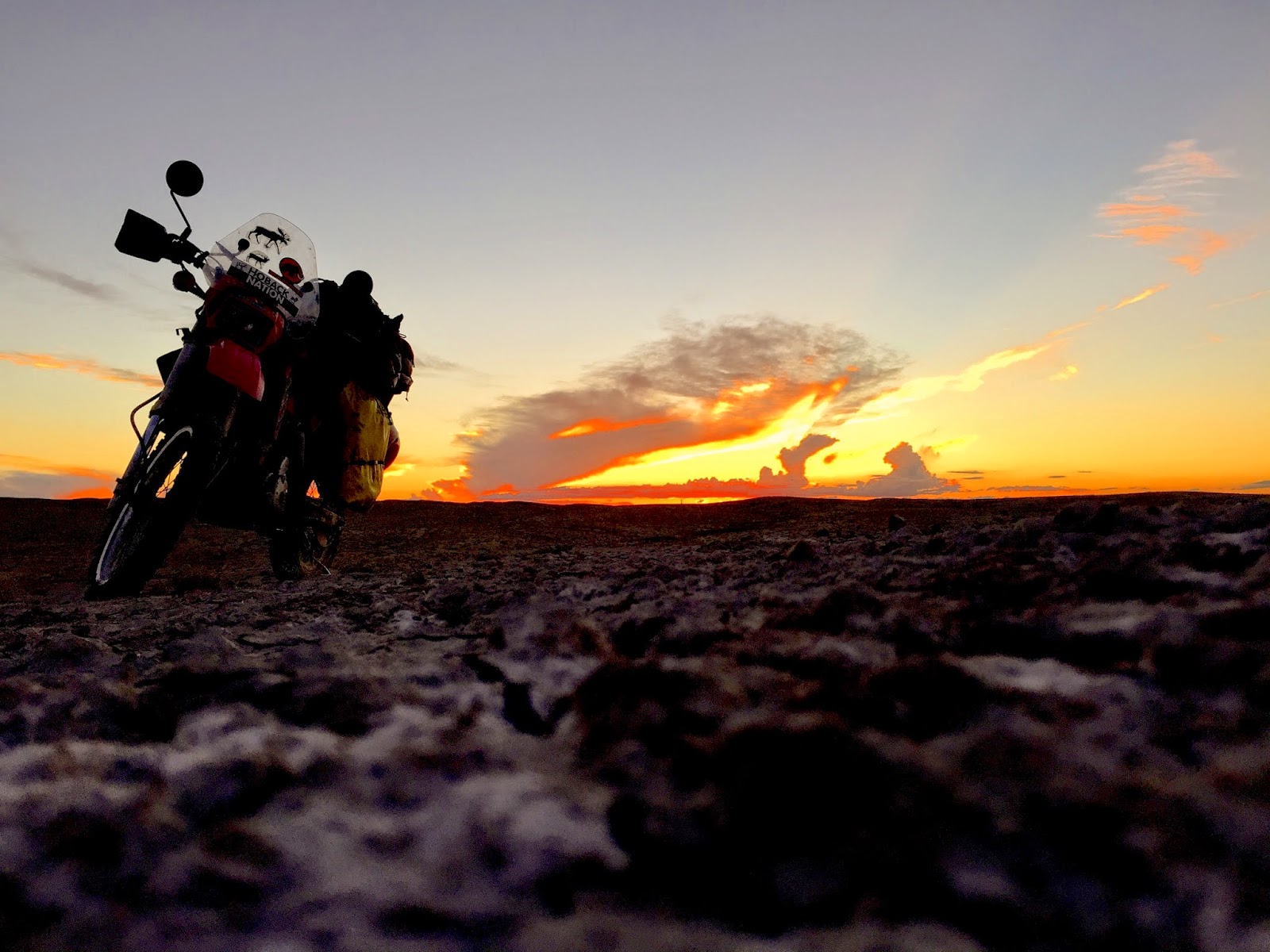 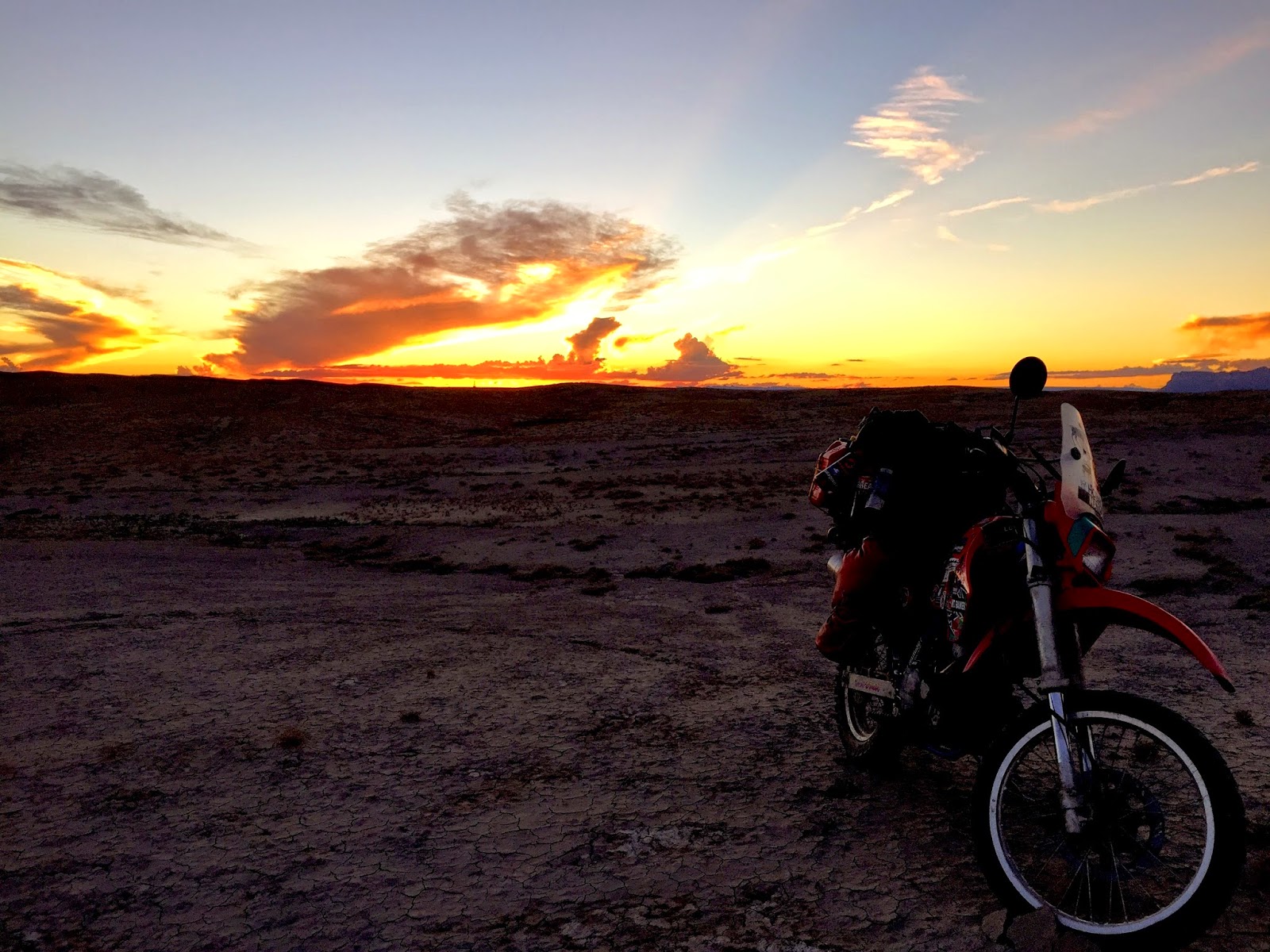 I venture out to BLM land and camp in the most isolated, barren terrain I’ve been on this trip.  After a few weeks of running from old man winter, I am finally warm again, and it feels great. 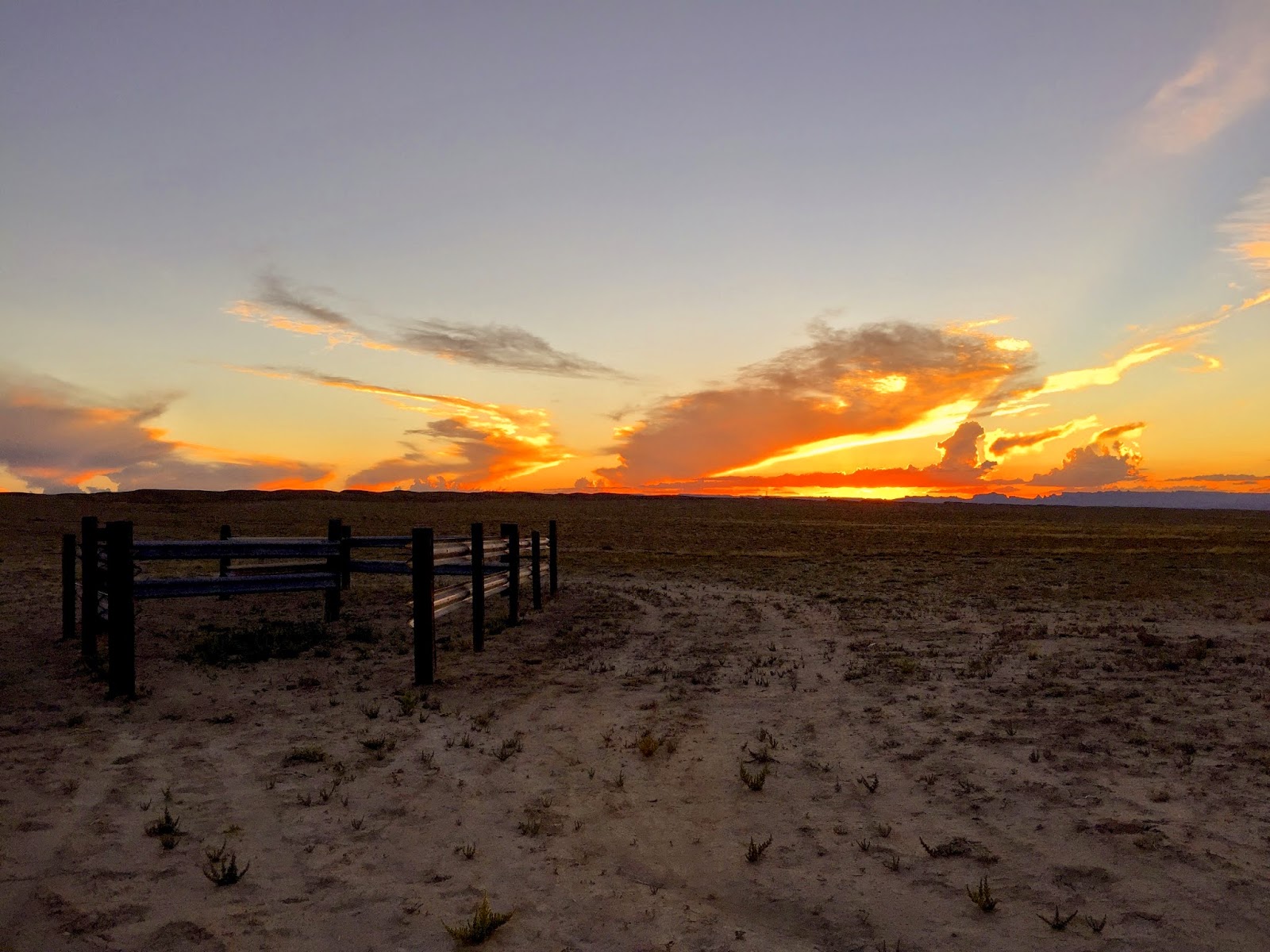 I strip down naked and lay in the dirt, and let the warmth in.

Get lost on dirt roads again, I breakfast in Moab.  Crappy food, snooty service, overpriced place that passes for decency.  I head to the Behind-The-Rocks area of Mob and get in my last long run before Mogollon Monster next weekend.


4 hours through blazing exposed sun.  I probably get in 20 or so miles, with all the swim breaks.  This is one of my favorite areas of the country. 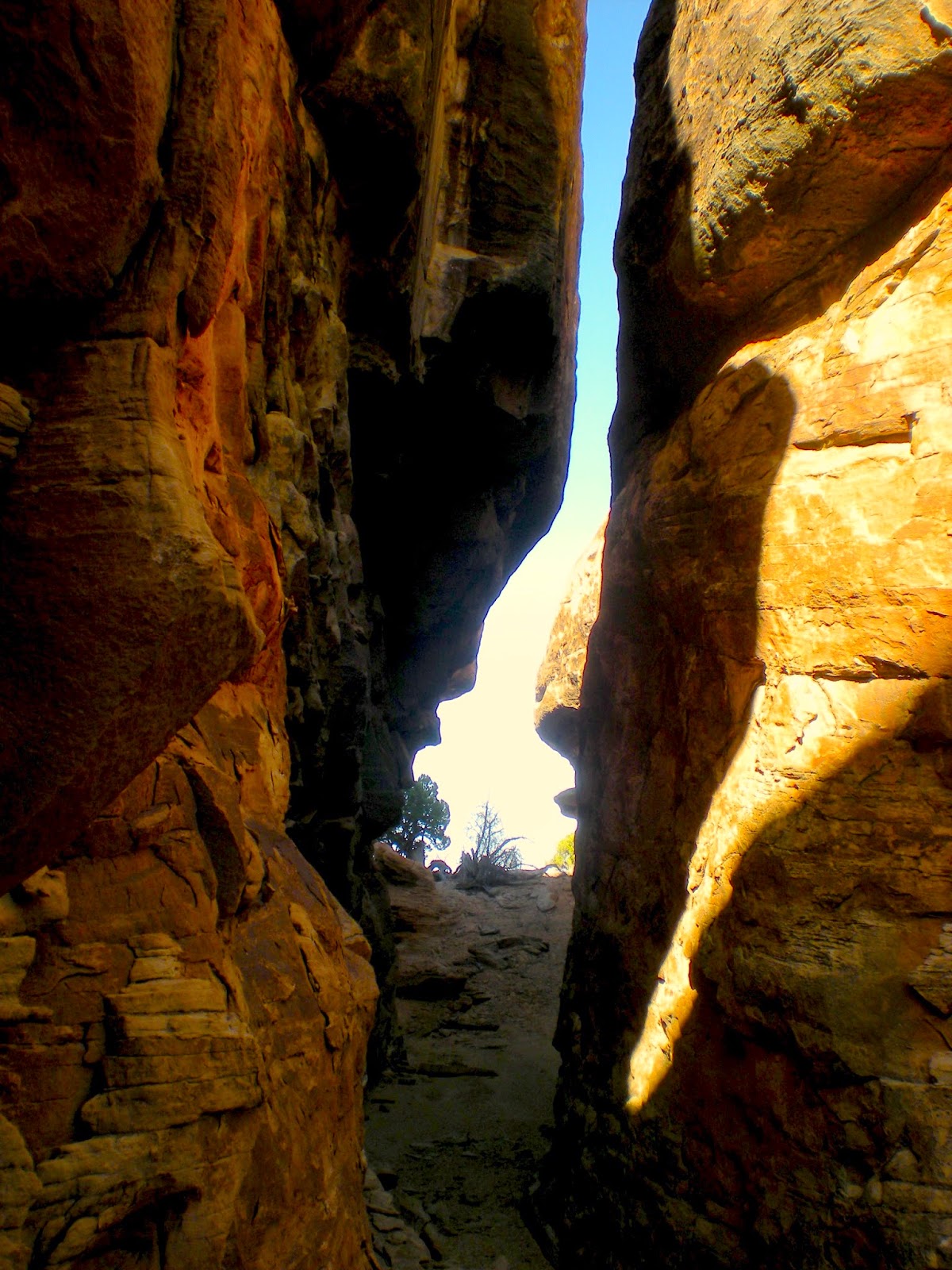 Canyonlands is maybe the most authentic, rugged, unreal landscape there is.  The Maze region has forever captured my imagination. 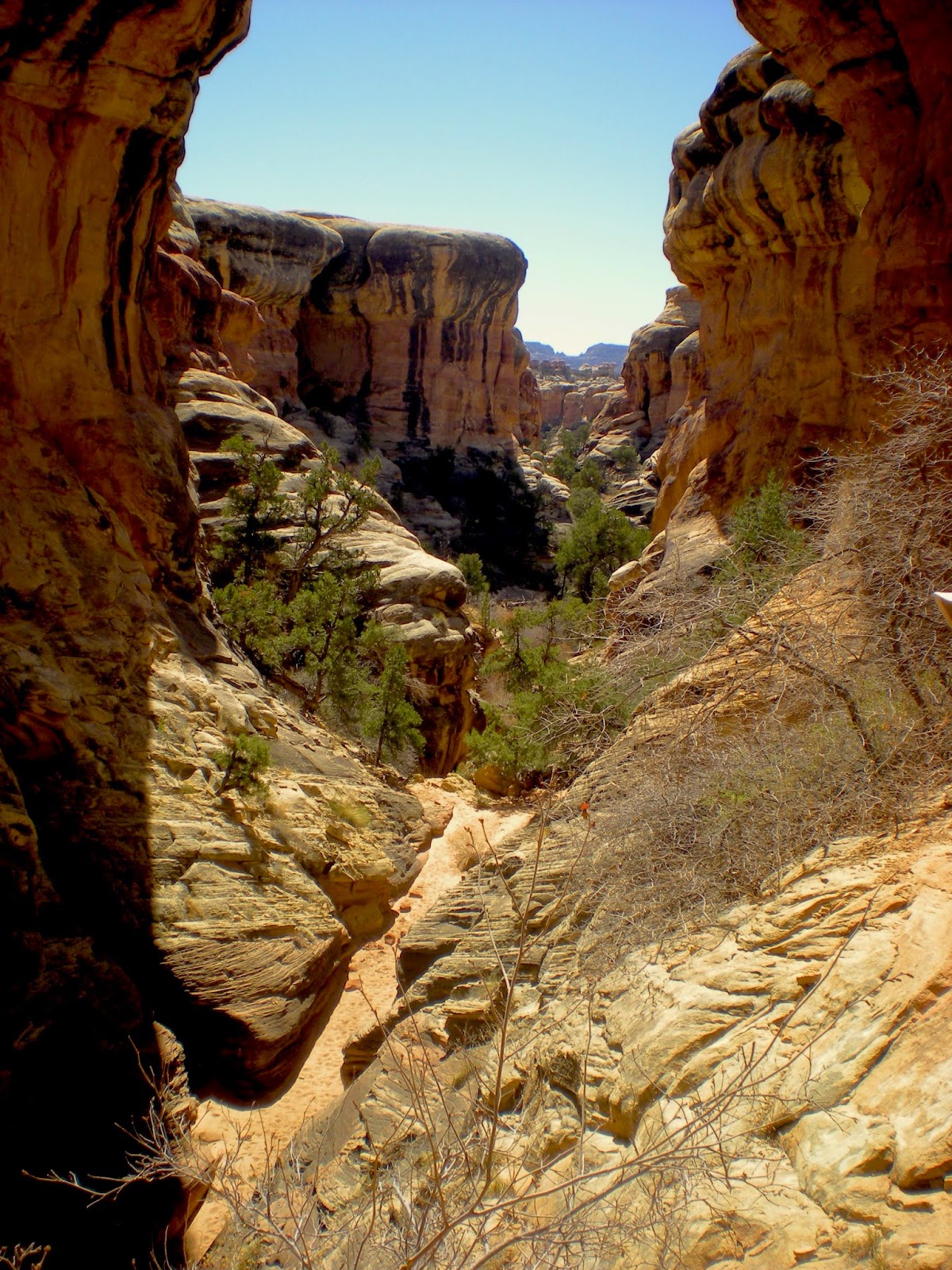 I gather up and head for it stopping at Church Rock for my traditional lap around the rock. 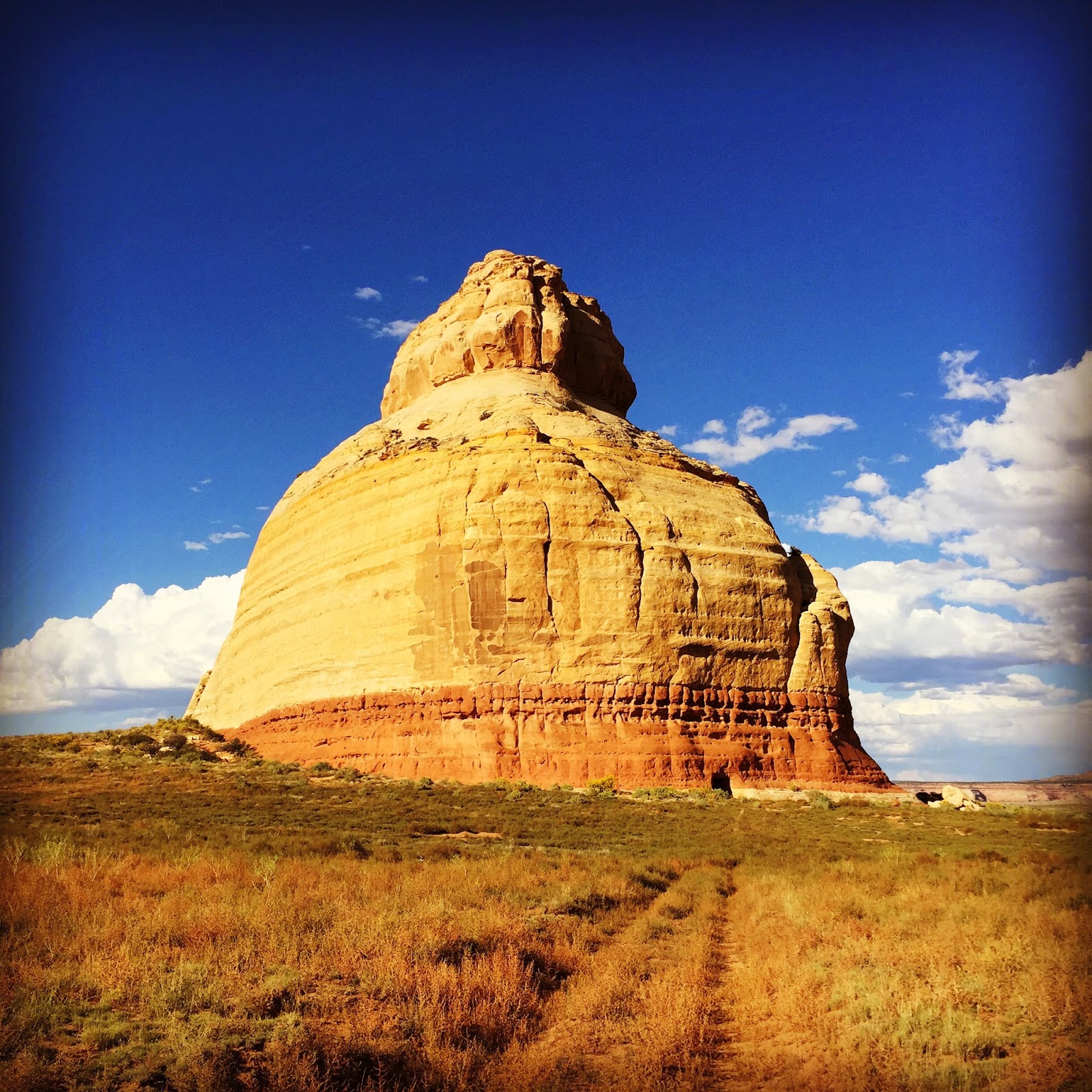 Camp with the buffalo.

Explore and run in The Needles district.  Head through the park and I take Frank on the ride of his life. 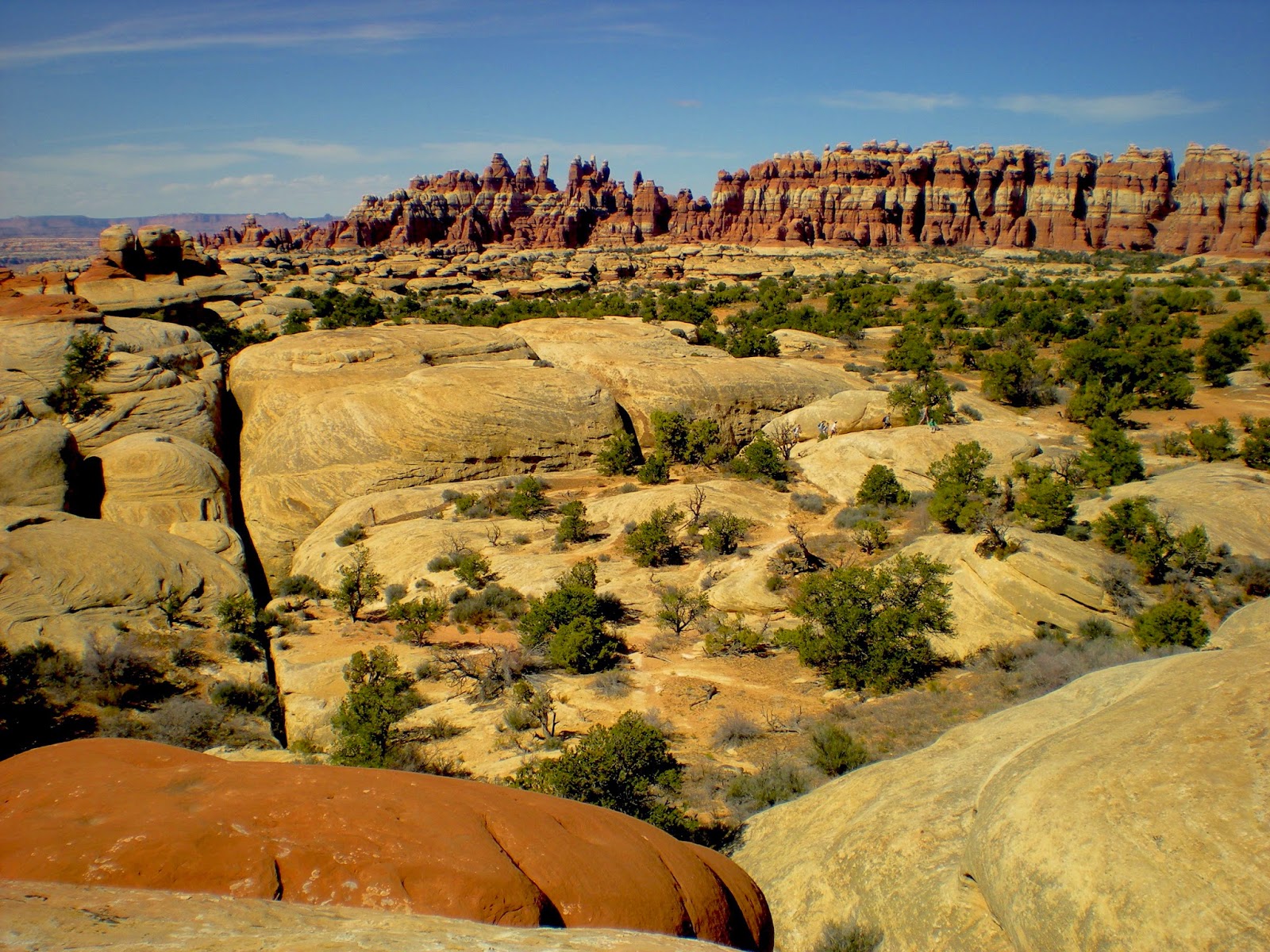 I cant even begin to explain the route on what is apparently some of the most technical 4x4 courses in Utah.  I eventually escape.


Out of the desert and up and over Bears Ears.  Down to Natural Bridges, through the Pinyon/Juniper forests until The Moki Dugway, a section of road which itself merits the visit. 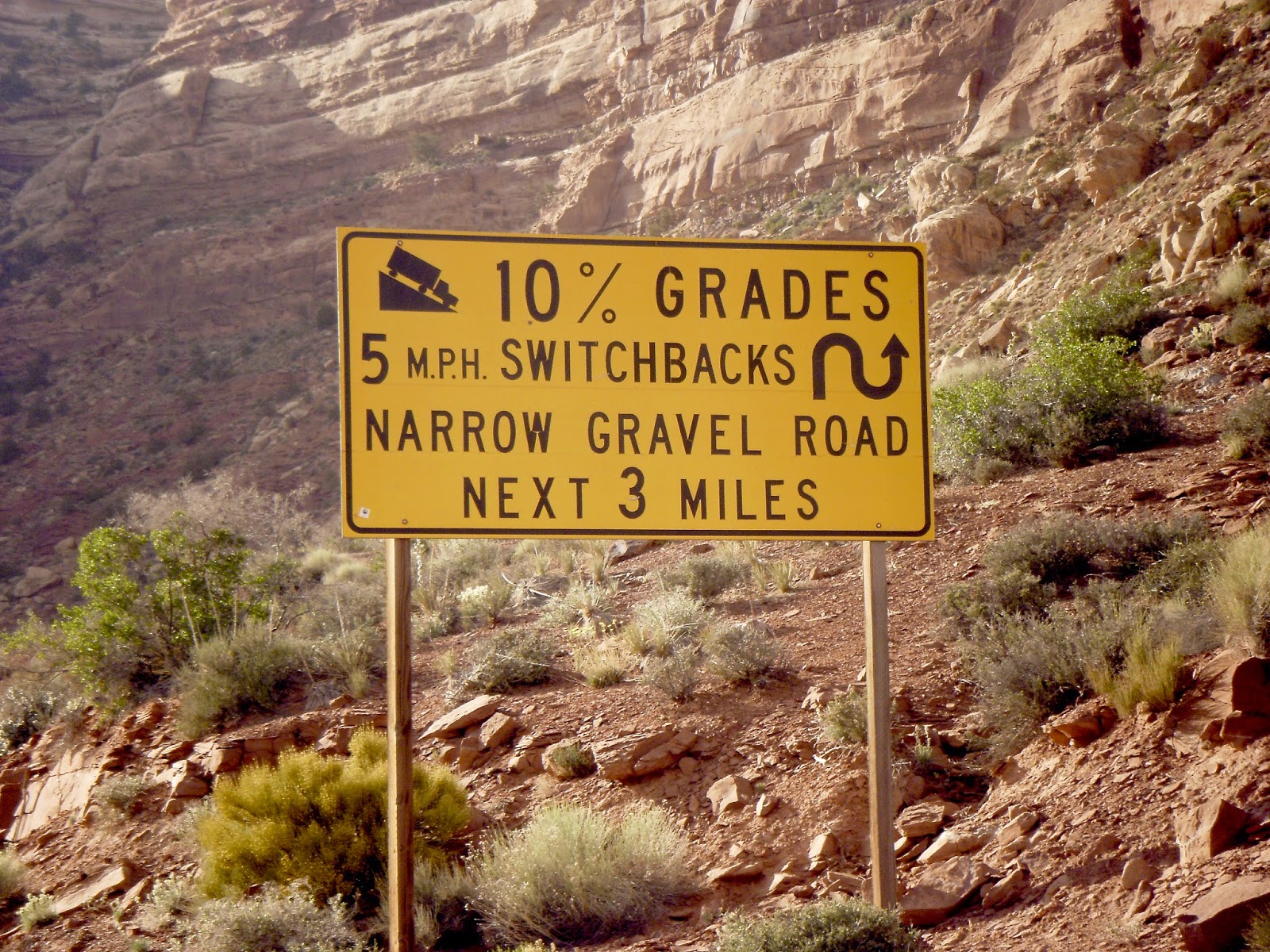 Steep grades, out of this world switchbacks which descend off the plateau to the desert lowlands, delivering its travelers to the Valley of the Gods.  There aren’t many roads left like this in the US.


I keep moving into the night, I see a sign for Flagstaff less than 200 miles away.  I think to myself there is no way. 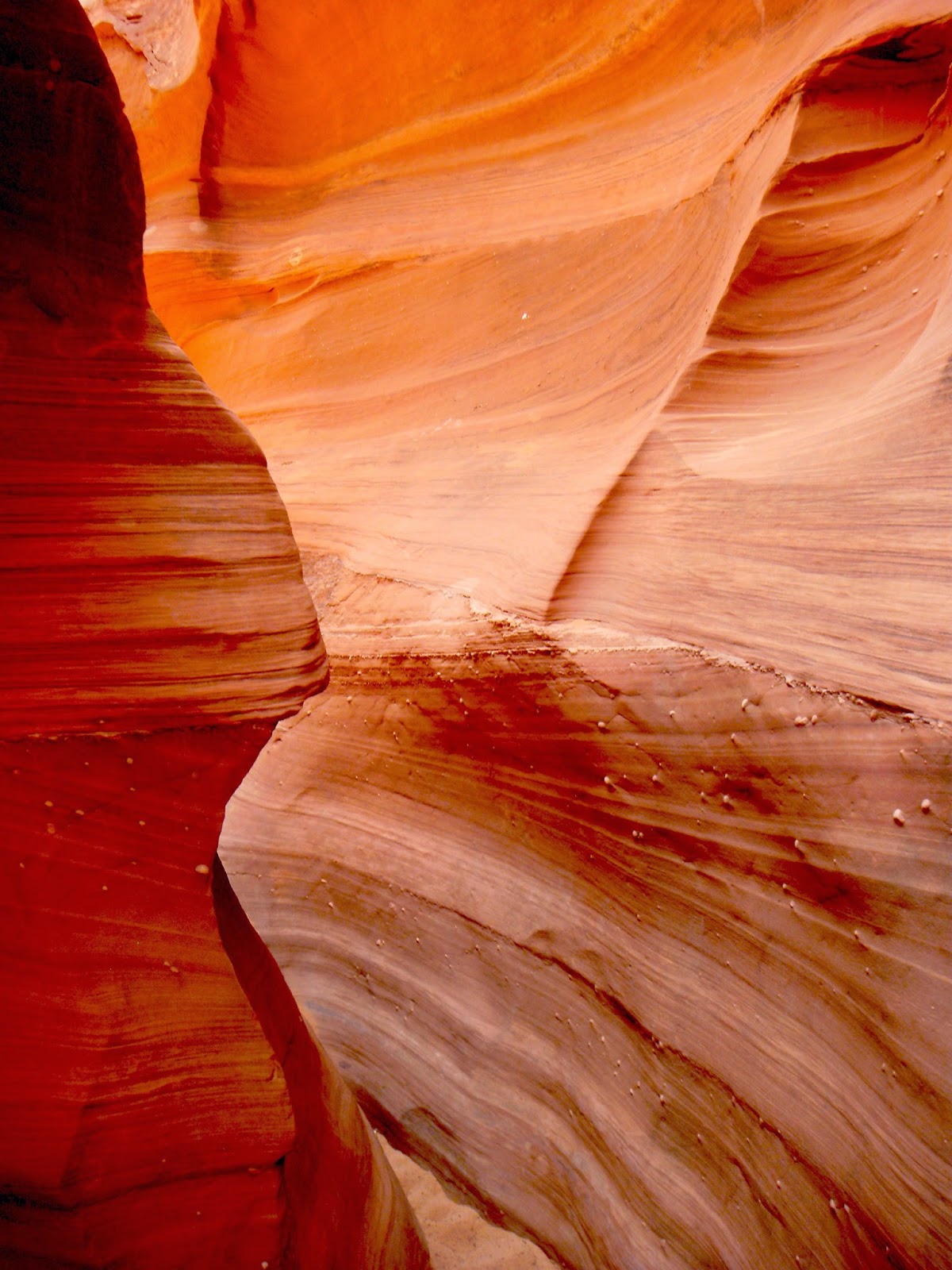 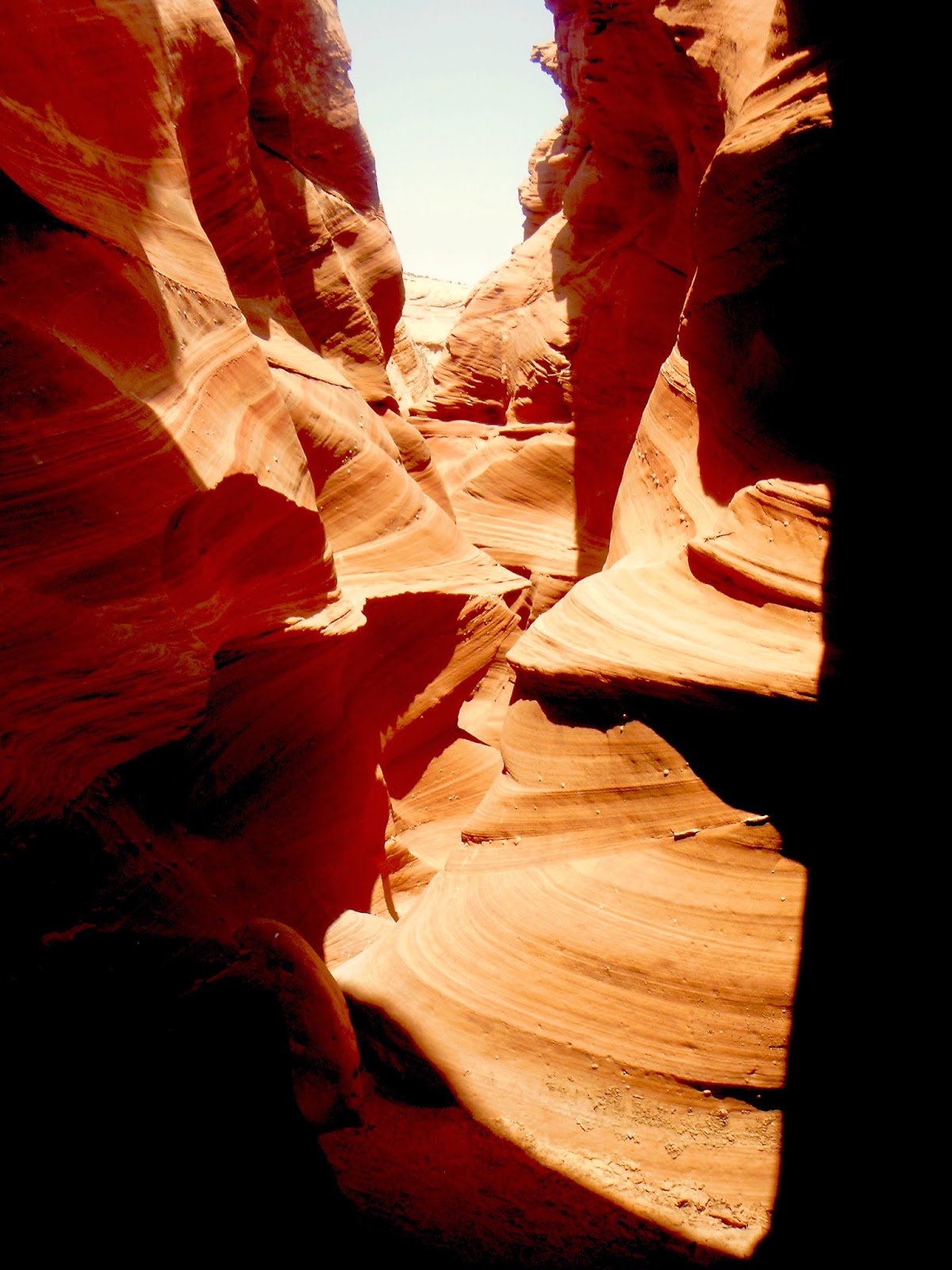 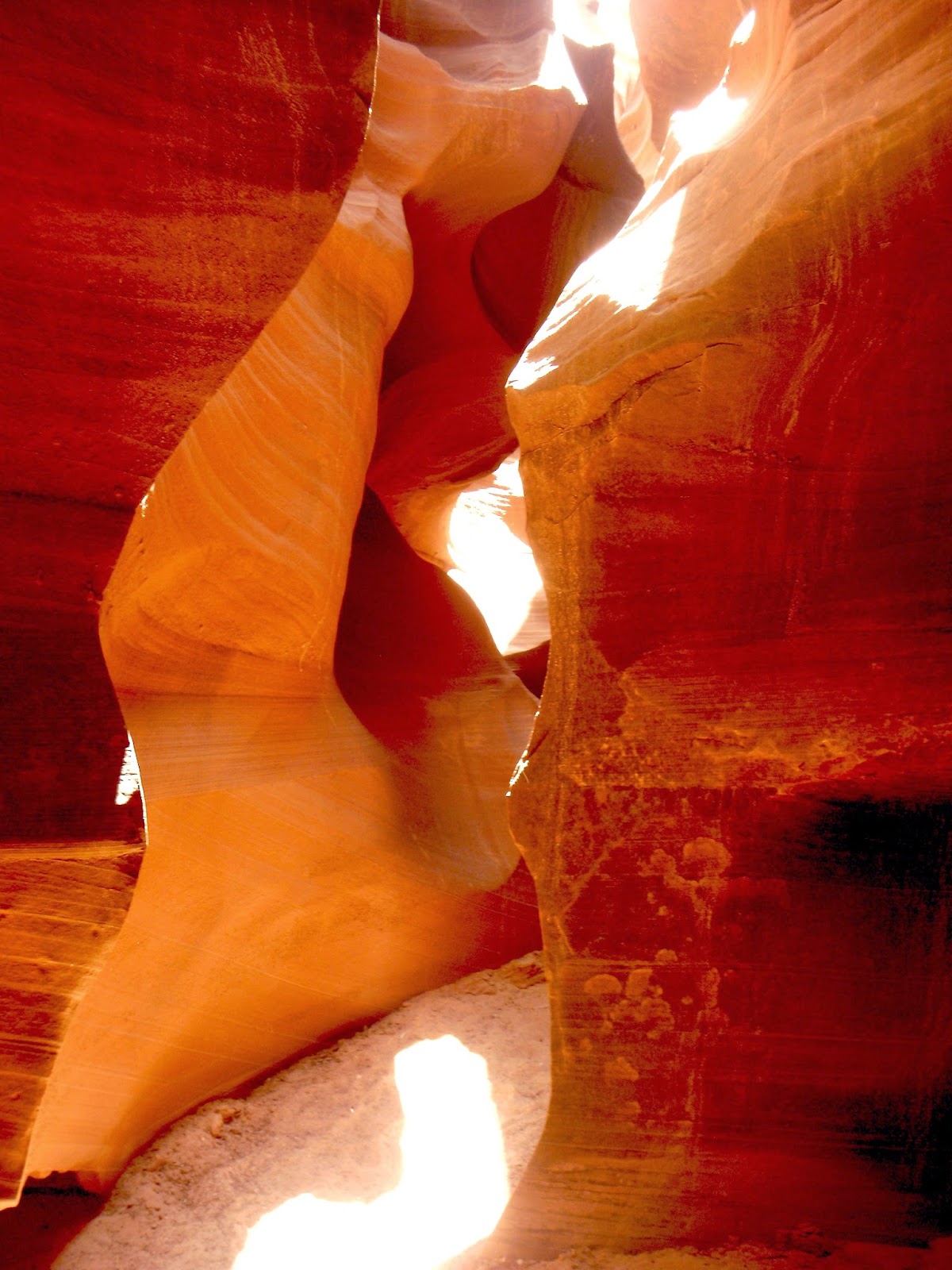 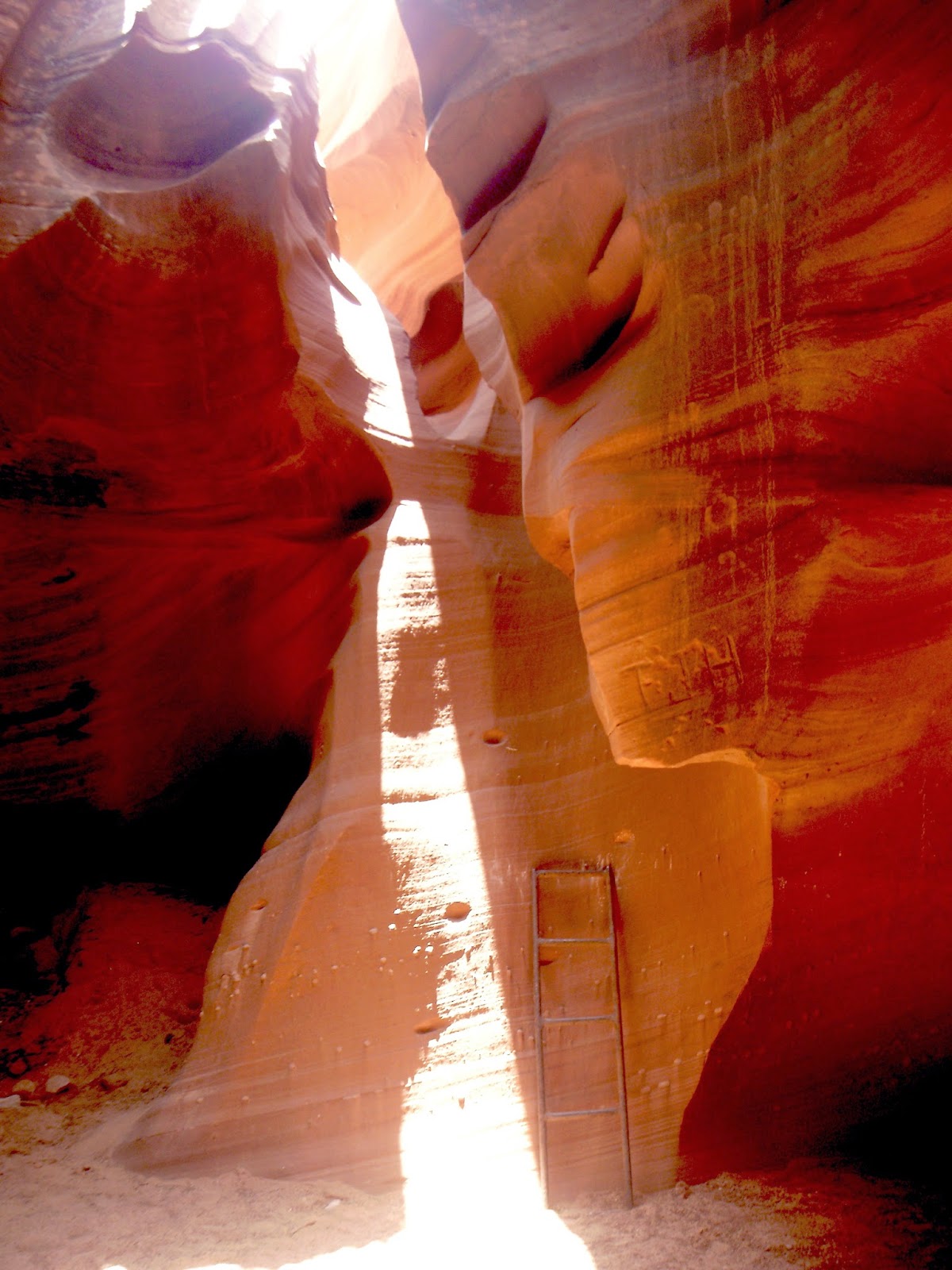 Something compels me and I push late into the night.  Once back on the rez I decide there is no stopping.  No camping out here, no with skinwalkers about. 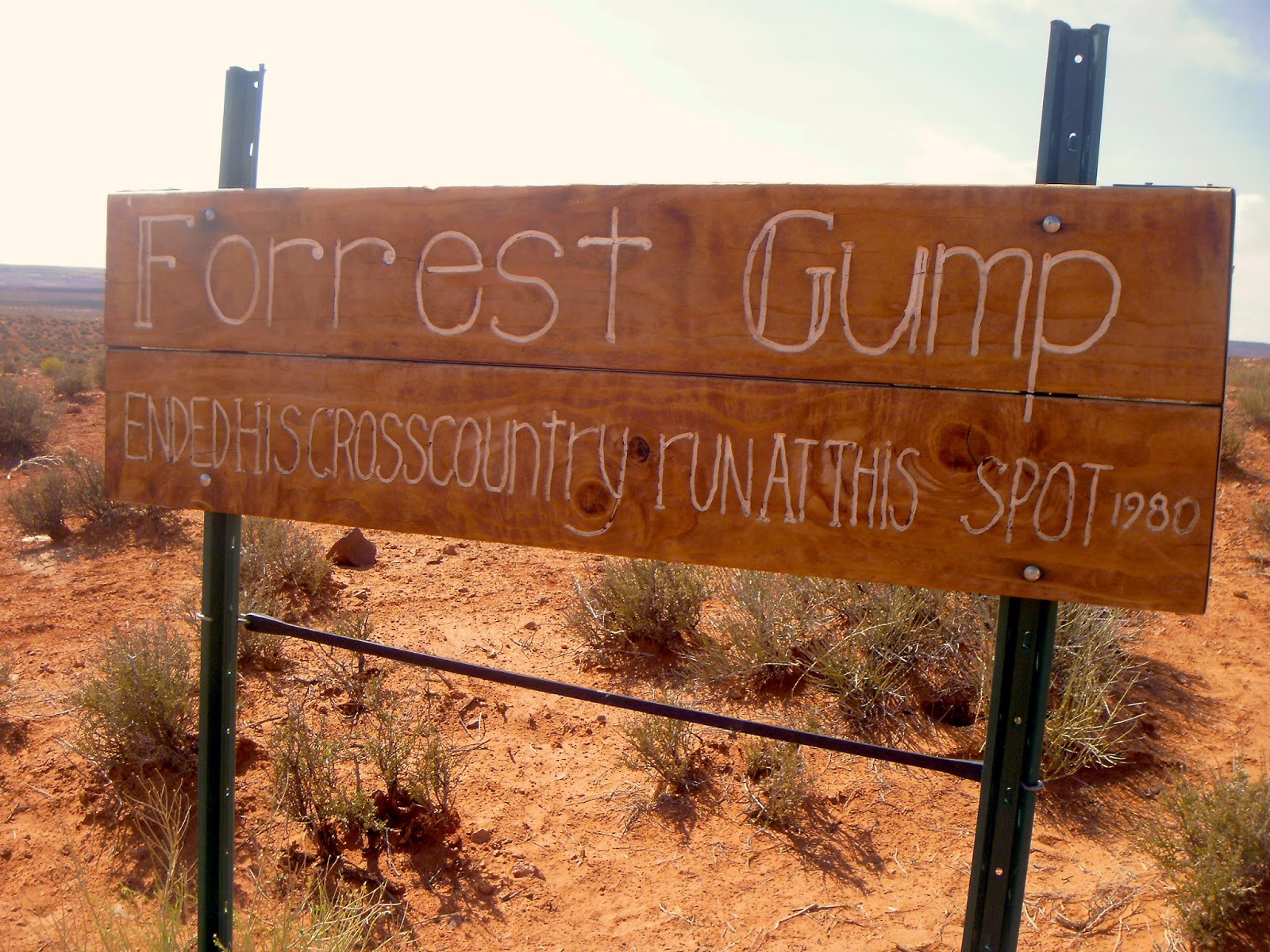 I push through a completely insane/unsafe dust/lightning/hail storm near Kayenta till Grey Mountain and come into Flagstaff, cold, soaked, dirty and exhausted.  I cant believe I just did that.

Good breakfast with familiar faces and run up Elden with Jeff, a local who will be running the Sky Race here in Flagstaff in a couple of weeks.  Whiskey and guitars occupy the evening.

Stop to see Jake at his coffee shop Firecreek then start for Prescott via Oak Creek Canyon.  I meet Tyler who will be crewing/pacing for me this weekend at the Mogollon Monster at the casino in Camp Verde.  We quickly lose our free vouchers and eat Mexican food.  We figure some logistics for the weekend and I make for Prescott, knighting over at Aunt Jean and Uncle Dave’s.

The last ride home.  Arrival back at the land, and its good to be home.  This leg of my journey is complete, 6,734 miles and 74 days later.  Time to settle in before leaving for the 107 mile Mogollon Monster which awaits me.  See you on down that trail, pardner.