The John Cappis 50k. The Hardest Marathon In The World


I showed up at Anthony’s at 11 pm. He had been ready for hours. The previous week was spent in the Tushars of central Utah marking course for a race I was bailing on to run John Cappis 50k.  The all day drive had rattled me, and I was in no real state to be thinking about, let alone preparing, for a day like the one on my immediate horizon.  My natural inclination towards vice is always thwarted on these race eves, one of my least favorite aspect of sporting events.


Yet there I sat.  Time and time again I sit.  Preparing for these  endurance feats.  With endurance mountain running, or trail running, when the outcome is always known, the issue becomes not if one can achieve the task set before them, but how fast one can achieve them.  I suppose this is the natural progression of things, this is sport after all, but is this really what the sport has become?  A sport that is meant to represent endurance, hardship, suffering, toughness and grit, boiled down and processed to the point where everyone gets a finishers medal, where times are logged and categorized, and then ranked on a popular sign up website?  Where the question stops being ‘Can it be done?’ but rather ‘How fast can one do it?’ I suppose this is inherent in what it is to ‘race.’  In order to compete against friends and foe, there must be an acceptable task set out before the athletes that is achievable and appropriate, to encourage and nurse the competitive instinct.  And although we gather at times for community and camaraderie, the end game of these sporting events are all the same.  Go fast.  Beat your neighbor.  Get the girl.  Feed your family.  Win.


All except for maybe this race.  Race?  What has become known as the proverbial ‘fat-ass’ is really just an excuse to throw an event and bypass national forest permitting.  As long as the number of participants never exceeds 75 (which in ultra running is surprisingly easy), there be no permits necessary.


Enter The John Cappis 50k.  Silverton Colorado.  10 years ago James Varner, founder of Rainshadow Running, organized a similar event here dubbed ‘The Epic 50k’ where a handful of lingering post-Hardrock gritty hoodlums, embarked on a day hike up and down the mountains outside of town.  The route boasted some 15,000’ of vertical gain, mostly off trail, up and down avalanche chutes and scree fields.  It took Eric Skaggs, at the time one of the countries best ultra runners almost 10 hours to complete the route, which came in surprisingly short of the 50k mark.


Number buff or not, the stats for the run are down right bewildering, especially compared to other mountain running events.  Skyrunning has solidified its niche in our sport as often representing some of the most difficult races and routes in our sport.  In order to meet qualifications for a sky race, the organizers of these events consider many things such as elevation, weather conditions, amount of ascent/descent, technical nature of the trails, mountain aesthetic/community, etc.  Skyrunning has a much richer tradition in Europe, where the permitting issues for events is fairly lax compared to the U.S., which is littered with national parks, wilderness areas, and other public lands (thank goodness) that have zero event policies.  With these limits on where events can be held in the U.S., the Skyrunning fad has nudged its way into our sport, often times uncomfortably, within the private, all welcoming hands of for-profit ski resorts all across our greater mountain west.  Many of these events even have slogans that will sell you on your mountain adventure, all amounting to a similar sentiment;  ‘Authenticity and Hardcore Mountain Experience.’  Or some other manifestation of the same marketing scheme where if you tell your participants it’s a real mountain run, maybe they wont notice the ski lifts above their heads, the perfectly graded access roads they’ve been on, or the fact that every year, the winners and course record holders of these events are all long-strided, heal-striking ex-roadies, who turns out do pretty well running up and down dirt roads.


All facetious shit-talking aside, these skyraces often boast about 10-12k’ of vertical gain for their 50k or similar distances, the majority of which is found on well-established trails or roads.  Even some of the more difficult 100k skyraces in our sport fail to meet the John Cappis benchmark in almost every qualifying standard.  For this years edicion segundo, James decided to add a couple more mountains to the mix, pushing the numbers to a mere 19,000’ of climbing, up and down six mountains visible from downtown Silverton, ascending and descending via the most direct routes with zero course markings (participants must carry a map or gps and stick to the general route). Boulder fields, scree gullies, snowfields, rock falls, bush whacking, 4th class scrambling and snow step kicking wildness and shenanigans all at a measly 9-13,000’ of rocky mountain high.  Add free entry to any and all qualified entrants, name it after a Hardrock wizard John Cappis, wait for the worst storm of the monsoon season to roll in, and now dare I say, you’ve got yourself a god damned mountain race.

15 people showed up.  It had been raining all night and the forecast for the rest of the day looked bleak.  Still dark out, two women, a german, a handful of Hardrock runners, some lost vagrants, a Flagstaffian trio and a Wyoming duo, two American hobos, volunteers and locals gathered at the historic Avon Hotel in downtown Silverton to listen to James give his warnings about the run.  He had personally vetted every single applicant’s experience level before permitting entry into the race, but a few important reminders never hurt.  Fall zones, lightning, debris slides, etc.  We give our hugs and good lucks, good-to-see-yas and nice-to-meet-yas, and uneventfully head out of town, over the bridge and up Idaho Gulch, or as it is more affectionately known, ‘The Avalanche Chute’ towards the summit of Kendall Mountain.

This first climb is undoubtedly the most dangerous part of the race as runners are expectedly grouped together, one above the other.  The top of Kendall is notoriously loose scree and boulders, the size that is just too big to walk, yet just too small to hop.  All of it loose and daring to plummet, cascade, and tumble.  I can tell James is worried, but also interested to see how this section goes; if all us hooligans make through unscathed.  Criss Furman, a local photographer, greets runners at the top of Kendall Mountain.

Runners, now a bit spread out continue through the clouds and zero visibility down Kendall at to the ridgeline connecting to one of Kendall’s sister peaks, topping out at 13,338 ft. 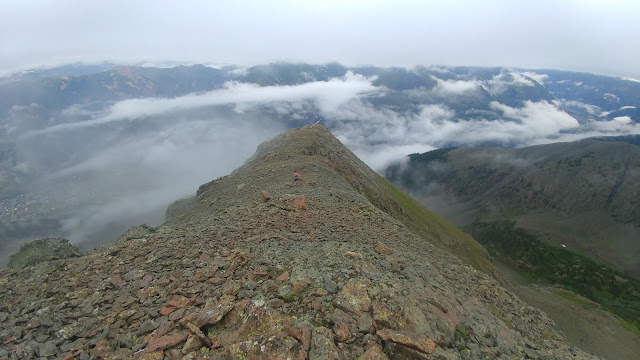 I link up with Tyler Gault, and we descend Banana Ridge.  We both at some point during the descent fall.  First blood has been drawn at The John Cappis 50k.

Back down to the Animas River and the first ‘aid’ station.  Kim Wrinkle, another Silverton local greets runners and snaps photos.  We continue.


A long drawn out trudge through aspen groves and montane thickets.  Up to the alpine and finally Macomber Peak.

Find the ridgeline and summit Tower Mountain.  Already 8000’ of climbing and we just started.  Drop down out of the clouds, slipping and sliding on soaked fields of wildflowers and wet and muddy scree fields down to Boulder Gulch.  Cross the creek and start climbing.  Around the lake, up the snow fields.  Up. Up. UP. Visibility is zero and the winds pick up.  Get lost.  Get turned around.  Check maps.  Just keep going up.  Summit Storm Peak at just shy of 13 ½ thousand feet.  Find the ridgeline.  Summit the southern sister peak.  Start the descent.  Get cliffed out.  Traverse left and ski down the slope.  Get lost.  Check maps.  Just keep descending.  Hancock Gulch and finally Cement Creek where the second aid station and a group of ruffians greet us, feed us, and caffeinate us.


The leaders arrive around 7 hours after starting, one hell of a half marathon.


At this point runners are greeted with their first trail of the day, climbing to the top of Anvil mountain.

The runnable terrain and moderate grade offer respite and a good stretch of the legs, albeit while still climbing a few thousand feet.  The descent down Zuni Gulch towards Mineral Creek and The Million Dollar Highway is mixed, but still offering good sections of trail especially near the creek and the third and final aid station, and the oh-so-infamous rope crossing of Mineral Creek made famous by The Hardrock 100.

Cut off times are a tricky endeavor that every race director deals with especially when nobody has ever attempted the course in one go before.    Here at Mineral Creek, some 20 miles in, who knows how much climbing and countless hours, falls, slides and stories, 12 hours was the mark.  While many arrived at Mineral Creek, only four made the cutoff.

No more trails, up the never ending Bear Mountain, scramble, kick in those steps, don’t look down, summit.  Descend, slip, fall, bruise your ribs, chase that herd of elk, worst bushwhacking yet and tarzan your way down at 45° down to Bear Creek.  Drink water, eat some food and start that final, grueling, massive climb up the rear side of your last mountain, the Sultan.  Climb, ignore your ribs, put on your jacket the storm is back, slip, fall, keep climbing, empty your shoes, ignore those ribs, scramble, claw, up you go, summit The Sultan.  At this point you might look down at Silverton and relish in the fact that you can see the finish line some 4,000 ft below, but alas, you are in a storm and visibility is zero, and immediate priority involves finding the correct ridgeline to descend.  Get lost, go in circles, wait for a break, and spot it.  Go.  Descend.  Descend, down…


I hit the highway maybe a half-mile out of town and start to wind down.  I see Criss again; the ever-faithful photographer is the first to congratulate me.  I run right in the middle of the damn road all the way into town, the few tourists and ATVers can deal with it, I’ve had a long day and I deserve it.

I run the double yellow line all the way into town and down Main Street.  I turn right towards The Avon and see it.  Everybody.  Am I the only one out here?  About 30 people stand, drinking beers and other adult beverages, cheering.  Two friends string across a toilet paper finish line and I cross.


I see James and give him a big high five and a hug.  I ask if anybody else is out there.  There were still three others he told me trying to finish.  Christof Teuscher , the German who would be running The Ouray 100 the next weekend, and The Wyoming Duo were still out there, trudging around somewhere on Bear Mountain.  Christof would end up finishing a few hours later, claiming ‘second’ place, and also his first DFL (Dead Fucking Last), which I believe he wears with a badge of pride.


I don’t hesitate and start drinking immediately.  No awards, no timeclock, no accolades or notoriety.  We are here for this.  For community, friends, for mountains and challenges.  For beers and laughs, and to see if somebody could do it.  The Silverton Six.  Seven?  One day.  Just shy of 15 hours and what we believe to be a new world record for the slowest winning 50k time ever.  Who cares.  And while sport certainly has its time and place, I’d rather be here, in Silverton, drinking whiskey and beer with exhausted, bloody and bruised friends, recounting the day, recounting the mountains, and conspiring for tomorrow.